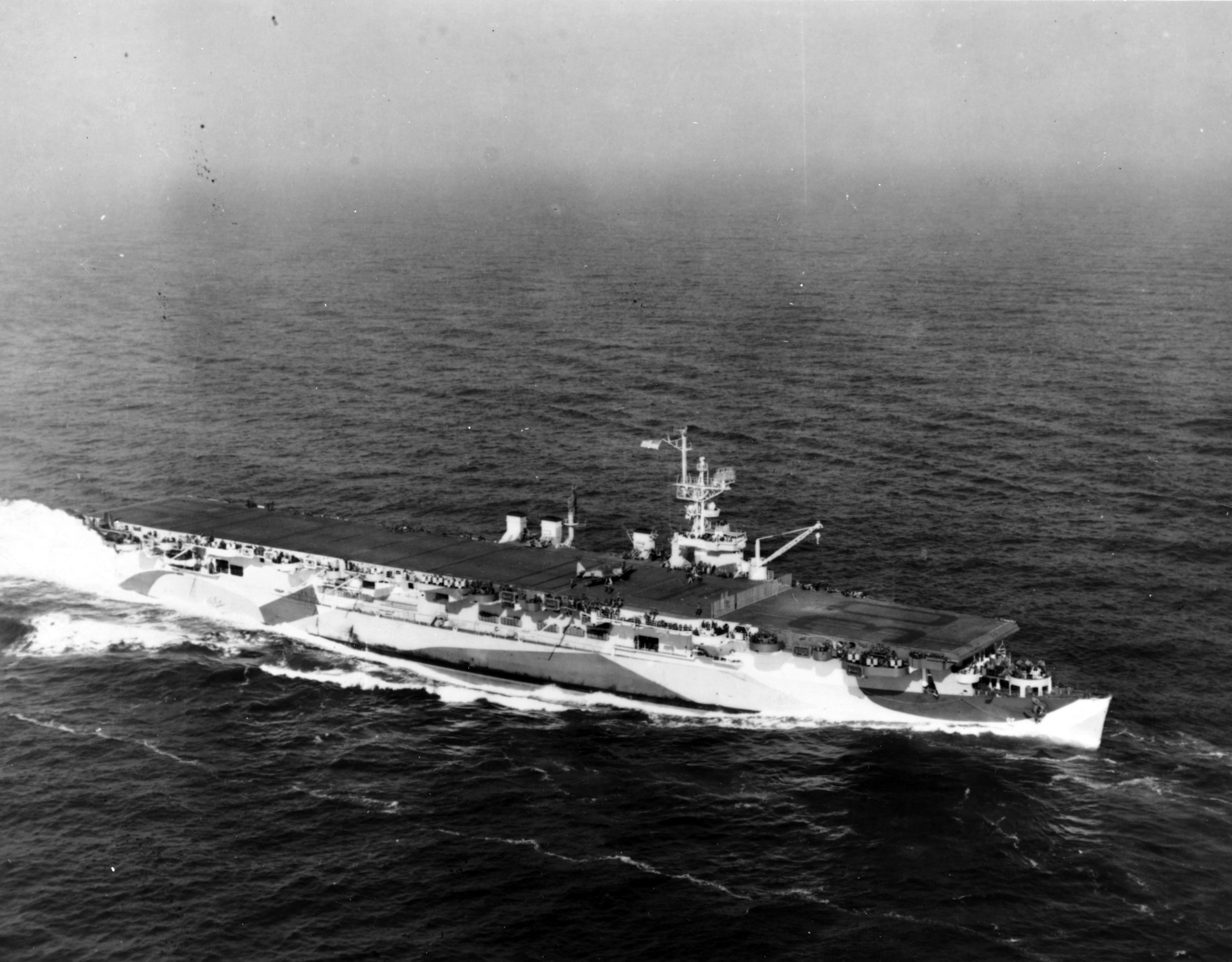 After shakedown in the Caribbean, San Jacinto  sailed, via the Panama Canal, San Diego, and Pearl Harbor, for the Pacific war zone. Arriving at Majuro, Marshall Islands, she became part of the growing might of Vice Admiral Marc A. Mitscher's Task Force 58/38, the fast carrier striking force of the Pacific Fleet. There, San Jacinto  embarked Air Group 51 whose fighters and torpedo planes would be the ship's chief weapons in battle.

After providing search patrols to protect other carriers striking at Wake and Marcus Islands, San Jacinto , by 5 June 1944, was ready to participate in the largest fleet action since the battle of Midway, almost exactly two years before. On that day, Task Force 58 sortied from Majuro and headed toward the Marianas to conduct air strikes preparatory to American seizure of Saipan and to protect the invasion forces from enemy air and naval attack.

This American thrust triggered a strong Japanese reaction; on 19 June, the Japanese Fleet launched more than 400 planes against the invasion fleet and the covering carrier force. In the ensuing air battle, known to American pilots as the "Marianas Turkey Shoot " more than 300 enemy planes were shot down. While San Jacinto's  planes were achieving their most one-sided victory of the war, her gunners helped to down the few attackers able to get near the American ships. Then, at dusk, Admiral Mitscher dispatched an all carrier attack after the retreating enemy fleet. The night recovery of the returning planes was accomplished amid considerable confusion. Reportedly, a Japanese carrier plane attempted a landing approach on San Jacinto , only to be waved off by the landing signal officer because its hook wasn't down.

San Jacinto  then participated in strikes against Rota and Guam and furnished combat air patrol (CAP) and antisubmarine patrol (ASP) for her task group. During these raids, a San Jacinto  fighter pilot was shot down over Guam and spent 17 days in a life raft trying to attract attention and 16 nights hiding on the island.

After a refueling and replenishment stop at Eniwetok Atoll, San Jacinto  joined in carrier strikes against the Palaus on 15 July. On 5 August, her targets were Chichi, Haha, and Iwo Jima. A brief stop at Eniwetok preceded dawn-to-dusk CAP and ASP duty while other carriers struck at Yap, Ulithi, Anguar, and Babelthuap, pinning down Japanese air forces while the Palaus were being assaulted on 15 September

Following a replenishment stop at Manus, Admiralty Islands, San Jacinto  joined in strikes against Okinawa and furnished photographic planes to get information necessary for future invasion plans. After refueling at sea, she once again supplied dawn-to-dusk air protection as other carriers sent strikes against Formosa northern Luzon, and the Manila Bay area from 12 to 19 October. During operations on 17 October, a fighter plane made a very hard landing and inadvertently fired its machine guns into the ship's island structure killing two men; wounding 24, including her commanding officer, and causing considerable damage to radar. Despite this accident, San Jacinto  remained battleworthy.

As American troops landed on Leyte in the central Philippines on 20 October, San Jacinto  provided close air support. On 24 October, this mission was interrupted by news of the tri-pronged approach of the Japanese fleet which precipitated the largest fleet battle in naval history.

San Jacinto  sent planes against the central force in the Sibuyan Sea, then raced north to launch strikes against the northern force, resulting in heavy damage to the Japanese carriers and surface combatants off Cape Engano. On 30 October, her fighters furnished air protection over Leyte while her guns shot down two planes attempting suicide attacks on the ship. After a pause at Ulithi, the carrier joined in attacks on the Manila Bay area, then took a side trip to Guam to exchange air groups, receiving Air Group 45. She received slight damage during a typhoon in December 1944.

After completing repairs at Ulithi, San Jacinto  and the rest of her fast carrier force entered the South China Sea and launched massive air attacks on the airfields of Formosa and against shipping at Cam Ranh Bay, French Indochina, and at Hong Kong. By refueling and replenishing at sea, Task Force 38 was able to continue its pressure on the enemy and strategic support for the American invasion of Luzon by strikes against the Ryukyu Islands.

Next, San Jacinto  joined in the first carrier strikes against the home islands of Japan. During the raids on 16 and 17 February 1945, carrier-based aircraft downed many enemy planes during fierce dogfights over airfields in the Tokyo area. These operations were designed to cover the imminent invasion of Iwo Jima. Next came air support for the landing marines, followed by further strikes against Tokyo and Okinawa before San Jacinto  returned to Ulithi.

While conducting operations off Kyushu, Japan, she witnessed the conflagration on Franklin (CV-13); and, on 19 March 1945, narrowly escaped destruction herself when a kamikaze barely missed her. More massive enemy attacks came with Operation "Iceberg" as the carrier force furnished air support for the invasion of Okinawa. On 5 April, more than 500 planes, primarily kamikazes, attacked. Fighter planes and antiaircraft guns shot down about 300, but many got through. San Jacinto 's gunners shot the wing off a would-be suicide plane, deflecting its dive, and splashed another only 50 feet off her port bow. Her mission of covering the Okinawa invasion entailed heavy air activity and kept the ship almost constantly at general quarters while supporting ground forces and repelling frequent attacks by suicide planes. On 7 April, San Jacinto 's bombers torpedoed Japanese destroyer, Hamakaze,  part of a naval suicide attack in which super battleship, Yamato,  was also sunk. San Jacinto  then returned to the dangerous job of defending against the suicide plane attacks, striking at the kamikaze airfields on Kyushu, and providing close air support for ground forces fighting on Okinawa. On 5 June, she successfully rode out another typhoon and after replenishing at Leyte, sortied for her final raids as part of Task Force 58. Her aircraft struck at Hokkaido and Honshu, Japan, on 9 July and continued to operate off the coast of Japan until the end of hostilities on 15 August 1945. Her air missions over Japan then became mercy flights over Allied prisoner-of war camps, dropping food and medicine until the men could be rescued. Her wartime mission completed, San Jacinto  returned home and tied up at Alameda, Calif., on 14 September 1945.

She was decommissioned on 1 March 1947 and joined the Pacific Reserve Fleet berthed at San Diego. Reclassified as an auxiliary aircraft transport (AVT-5) on 15 May 1959; she was struck from the Navy list on 1 June 1970.

San Jacinto  earned five battle stars and was awarded the Presidential Unit citation. Her hull was sold for scrapping on 15 December 1971 to National Metal and Steel Co., Terminal Island, Calif.