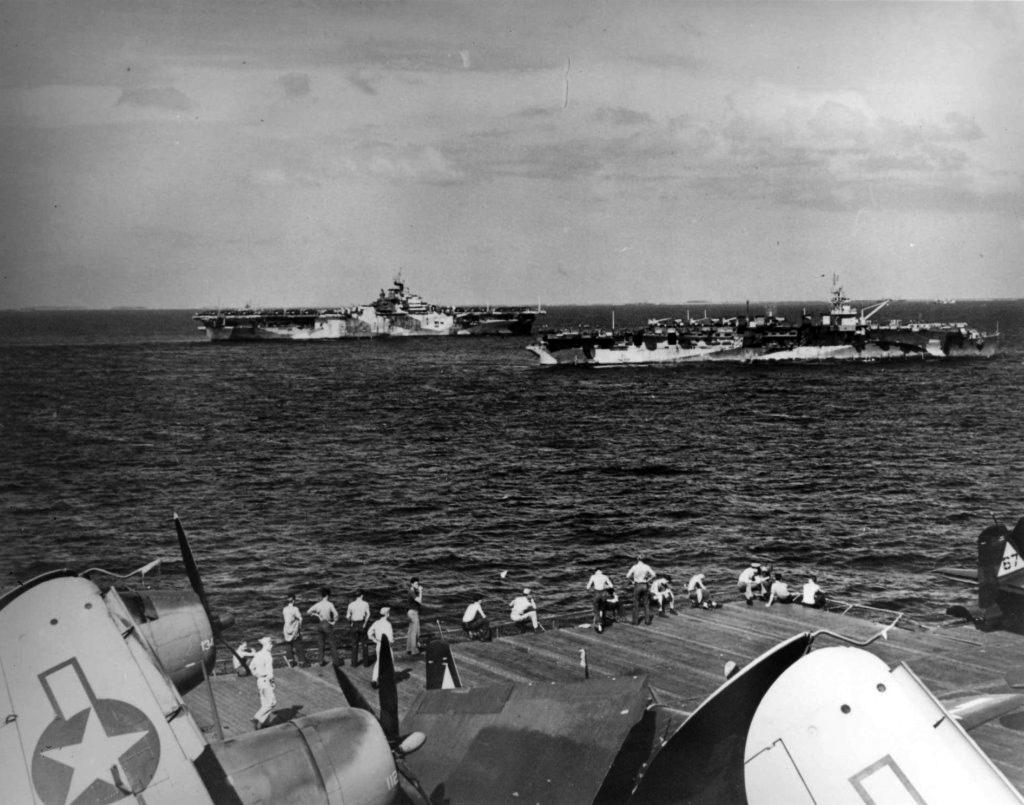 The first of a new class of carriers converted from cruiser hulls, Independence conducted shakedown training in the Caribbean. She then steamed through the Panama Canal to join the Pacific Fleet, arriving San Francisco 3 July 1943. Independence got underway for Pearl Harbor 14 July, and after 2 weeks of vital training exercises sailed with carriers Essex and Yorktown for a devastating raid on Marcus Island. Planes from the carrier force struck 1 September and destroyed over 70 percent of the installations on the island. The carrier began her next operation, a similar strike against Wake Island 5 to 6 October as CVL-22, redesignated 15 July 1943.

Independence sailed from Pearl Harbor for Espiritu Santo 21 October, and, during an ensuing carrier attack on Rabaul 11 November, the ship's gunners scored their first success-six Japanese planes shot down After this operation the carrier refueled at Espiritu Santo and headed for the Gilberts and prelanding strikes on Tarawa 18 to 20 November 1943. During a Japanese counterattack 20 November, Independence was attacked by a group of planes low on the water. Six were shot down, but the planes managed to launch at least five torpedoes one of which scored a hit on the carrier's starboard quarter. Seriously damaged, the ship steamed to Funafuti 23 November for repairs. With the Gilberts operation, first step on the mid-Pacific road to Japan, underway, Independence returned to San Francisco 2 January 1944 for more permanent repairs.

The veteran carrier returned to Pearl Harbor 3 July 144. During her repair period the ship had been fitted with an additional catapult, and upon her arrival in Hawaiian waters, Independence began training for night carrier operations. She continued this pioneering work 24 to 29 August out of Eniwetok. The ship sailed with a large task group 29 August to take part in the Palaus operation, aimed at securing bases for the final assault on the Philippines in October. Independence provided night reconnaissance and night combat air patrol for Task Force 38 during this operation.

In September the fast carrier task force regularly pounded the Philippines in preparation for the invasion. When no Japanese counterattacks developed in this period, Independence shifted to regular daytime operations, striking targets on Luzon. After replenishment at Ulithi in early October, the great force sortied 6 October for Okinawa. In the days that followed the carriers struck Okinawa, Formosa, and Philippines in a striking demonstration of the mobility and balance of the fleet. Japanese air counterattacks were repulsed, with Independence providing day strike groups in addition to night fighters and reconnaissance aircraft for defensive protection.

As the carrier groups steamed east of the Philippines 23 October, it became apparent, as Admiral Carney later recalled, that "something on a grand scale was underfoot." And indeed it was, as the Japanese fleet moved on a three pronged effort to turn back the American beachhead on Leyte Gulf. Planes from Independence's Task Group 38.2, under Rear Admiral Bogan, spotted Kurita's striking force in the Sibuyan Sea 24 October and the carriers launched a series of attacks. Planes from Independence and other ships sank giant battleship Musashi and disabled a cruiser.

That evening Admiral Halsey made his fateful decision to turn Task Force 38 northward in search of Admiral Ozawa's carrier group. Independence's night search planes made contact and shadowed the Japanese ships until dawn 26 October, when the carriers launched a massive attack. In this second part of the great Battle for Leyte Gulf, all four Japanese carriers were sunk. Meanwhile American heavy ships had won a great victory in Surigao Strait; and a light carrier force had outfought the remainder of Kurita's ships in the Battle Off Samar. After the great battle, which virtually spelled the end of the Japanese Navy as a major threat, Independence continued to provide search planes and night fighter protection for Task Force 38 in strikes on the Philippines. In these operations the ship had contributed to a major development in carrier group operations.

Independence returned to Ulithi for long-delayed rest and replenishment 9 to 14 November, but soon got underway to operate off the Philippines on night attacks and defensive operations. This phase continued until 30 December 1944, when the great task force sortied from Ulithi once more and moved northward. From 3 to 9 January the carriers supported the Lingayen landings on Luzon, after which Halsey took his fleet on a daring foray into the South China Sea. In the days that followed the aircraft struck at air bases on Formosa and on the coasts of Indo-China and China. These operations in support of the Philippines campaign marked the end of the carrier's night operations, and she sailed 30 January 1945 for repairs at Pearl Harbor.

Independence returned to Ulithi 13 March 1945 and got underway net day for operations against Okinawa, last target in the Pacific before Japan itself. She carried out preinvasion strikes 30 to 31 March, and after the assault 1 April remained off the island supplying Combat Air Patrol and strike aircraft. Her planes shot down numerous enemy planes during the desperate Japanese attacks on the invasion force. Independence remained off Okinawa until 10 June when she sailed for Leyte.

During July and August the carrier took part in the final carrier strikes against Japan itself, attacks which lowered enemy morale and had much to do with the eventual surrender. After the end of the war 15 August, Independence aircraft continued surveillance flights over the mainland locating prisoner of war camps, and covered the landings of Allied occupation troops. The ship departed Tokyo 22 September 1945, arriving San Francisco via Saipan and Guam 31 October.

Independence joined the "Magic-Carpet" fleet beginning 15 November 1945, transporting veterans back to the United States until arriving San Francisco once more 28 January 1946. Assigned as a target vessel for the Bikini atomic bomb tests, she was placed within one-half mile of ground zero for the 1 July explosion. The veteran ship did not sink, however, and after taking part in another explosion 25 July was taken to Kwajalein and decommissioned 28 August 1946. The highly radioactive hulk was later taken to Pearl Harbor and San Francisco for further tests and was finally sunk in weapons tests off the coast of California 29 January 1951.