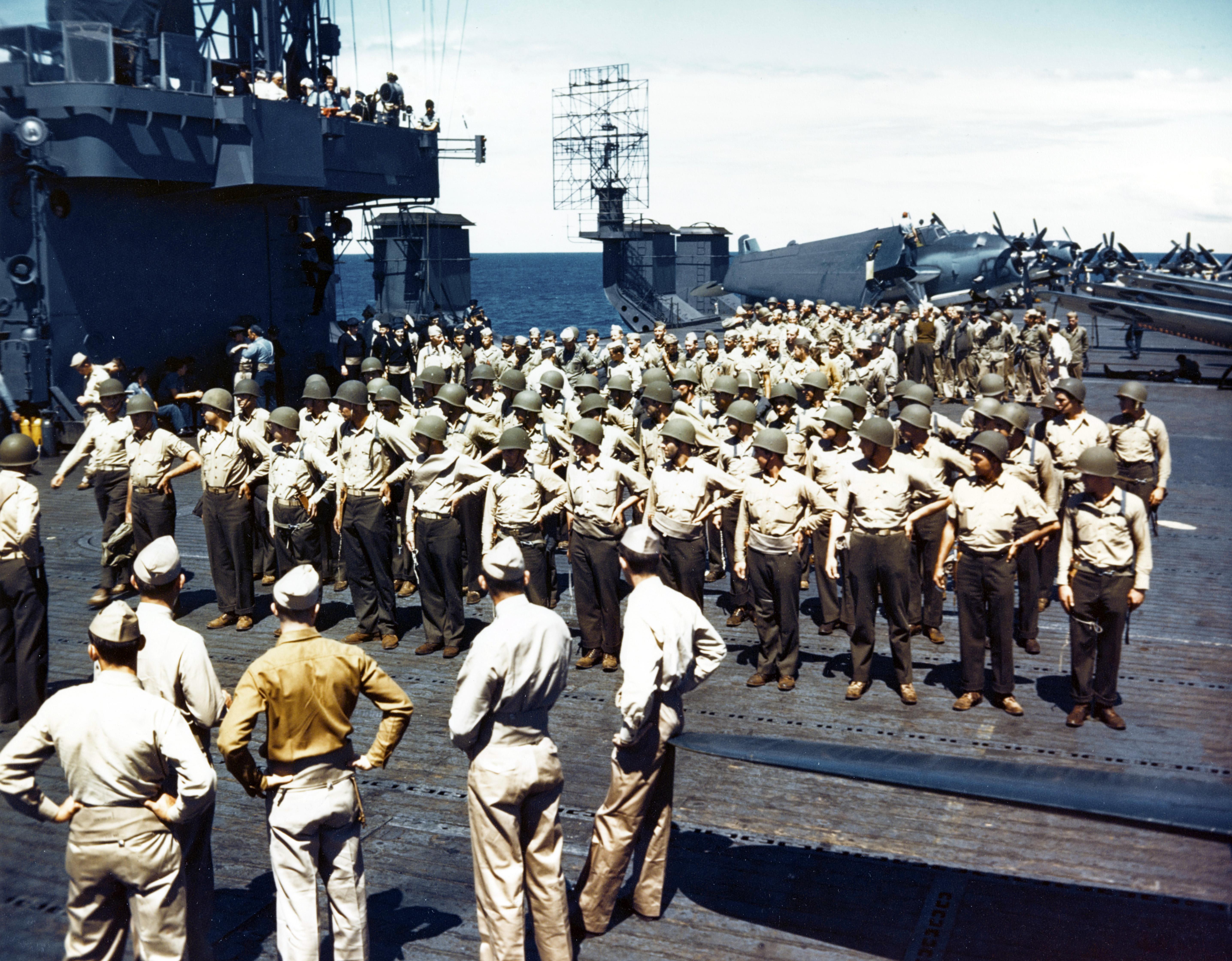 Departing Philadelphia 29 August 1943, Cowpens arrived at Pearl Harbor 19 September to begin the active and distinguished war career which was to earn a Navy Unit Commendation. She sailed with TF 14 for the strike on Wake Island on 5 and 6 October, then returned to Pearl Harbor to prepare for strikes on the Marshall Islands preliminary to invasion. She sortied from Pearl Harbor 10 November to launch air strikes on Mille and Makin atolls between 19 and 24 November, and Kwajalein and Wotje on 4 December, returning to her base 9 December.

Joining the vast carrier TF 58, Cowpens sailed from Pearl Harbor 16 January 1944 for the invasion of the Marshalls. Her planes pounded Kwajalein and Eniwetok the last 3 days of the month to prepare for the assault landing on the 31st. Using Majuro as a base, the force struck at Truk on 16 and 17 February and the Marianas on 21 and 22 February before putting in to Pearl Harbor 4 March. Returning to Majuro, TF 58 based here for attacks on the western Carolines; Cowpens supplied air and antisubmarine patrols during the raids on Palau, Yap, Ulithi and Woleai from 30 March to 1 April. After operating off New Guinea during the invasion of Hollandia from 21 to 28 April, Cowpens took part in the strikes on Truk, Satawan and Ponape between 29 April and 1 May, returning to Majuro 14 May for training.

From 6 June to 10 July 1944, Cowpens operated in the Marianas operation. Her planes struck the island of Saipan to aid the assault troops, and made supporting raids on Iwo Jima, Pagan, Rota, and Guam. They also took part in the Battle of the Philippine Sea on 19 and 20 June, accounting for a number of the huge tally of enemy planes downed. After a brief overhaul at Pearl Harbor, Cowpens rejoined the fast carrier task force at Eniwetok on 17 August. On the 29th, she sailed for the preinvasion strikes on the Palaus, whose assault was an essential preliminary to the return to the Philippines. From 13 to 17 September, she was detached from the force to cover the landings on Morotai, then rejoined it for sweep, patrol, and attack missions against Luzon from 21 to 24 September. Cowpens, with her task group, flew strikes to neutralize Japanese bases on Okinawa and Formosa from 10 to 14 October, and when Canberra (CA-70) and Houston (CL-81) were hit by torpedoes, Cowpens provided air cover for their safe withdrawal, rejoining her task group 20 October. En route to Ulithi, she was recalled when the Japanese Fleet threatened the Leyte invasion, and during the Battle of Surigao Strait phase of the decisive Battle for Leyte Gulf on 25 and 26 October, provided combat air patrol for the ships pursuing the fleeing remnant of the Japanese fleet. Continuing her support of the Philippines advance, Cowpens' planes struck Luzon repeatedly during December. During the disastrous typhoon of 18 December, Cowpens lost one man, planes and equipment but skillful work by her crew prevented major damage, and she reached Ulithi safely 21 December to repair her storm damage.

Between 30 December 1944 and 26 January 1945, Cowpens was at sea for the Lingayen Gulf landings. Her planes struck targets on Formosa, Luzon, the Indo-Chinese coast and the Hong Kong-Canton area and Okinawa during January. On 10 February, Cowpens sortied from Ulithi for the Iwo Jima operation, striking the Tokyo area, supporting the initial landings from 19 to 22 February, and hitting Okinawa on 1 March.

After overhaul at San Francisco and training at Pearl Harbor, Cowpens sailed 13 June for San Pedro Bay, Leyte, on her way striking Wake Island on 20 June. Rejoining TF 58, Cowpens sailed from San Pedro Bay 1 July to join in the final raids on the Japanese mainland. Her planes pounded Tokyo, Kure, and other cities of Hokkaido and Honshu until 15 August. Remaining off Tokyo Bay until the occupation landings began 30 August, Cowpens launched photographic reconnaissance missions to patrol airfields and shipping movements, and to locate and supply prisoner-of-war camps. Men from Cowpens were largely responsible for the emergency activation of Yokosuka airfield for Allied use. Between 8 November 1945 and 28 January 1946 Cowpens made two voyages to Pearl Harbor, Guam, and Okinawa to return veterans. Placed in commission in reserve at Mare Island 3 December 1946, Cowpens was decommissioned 13 January 1947. [Cowpens was struck from the Navy list on 1 November 19559 and sold 1 October 1960.]