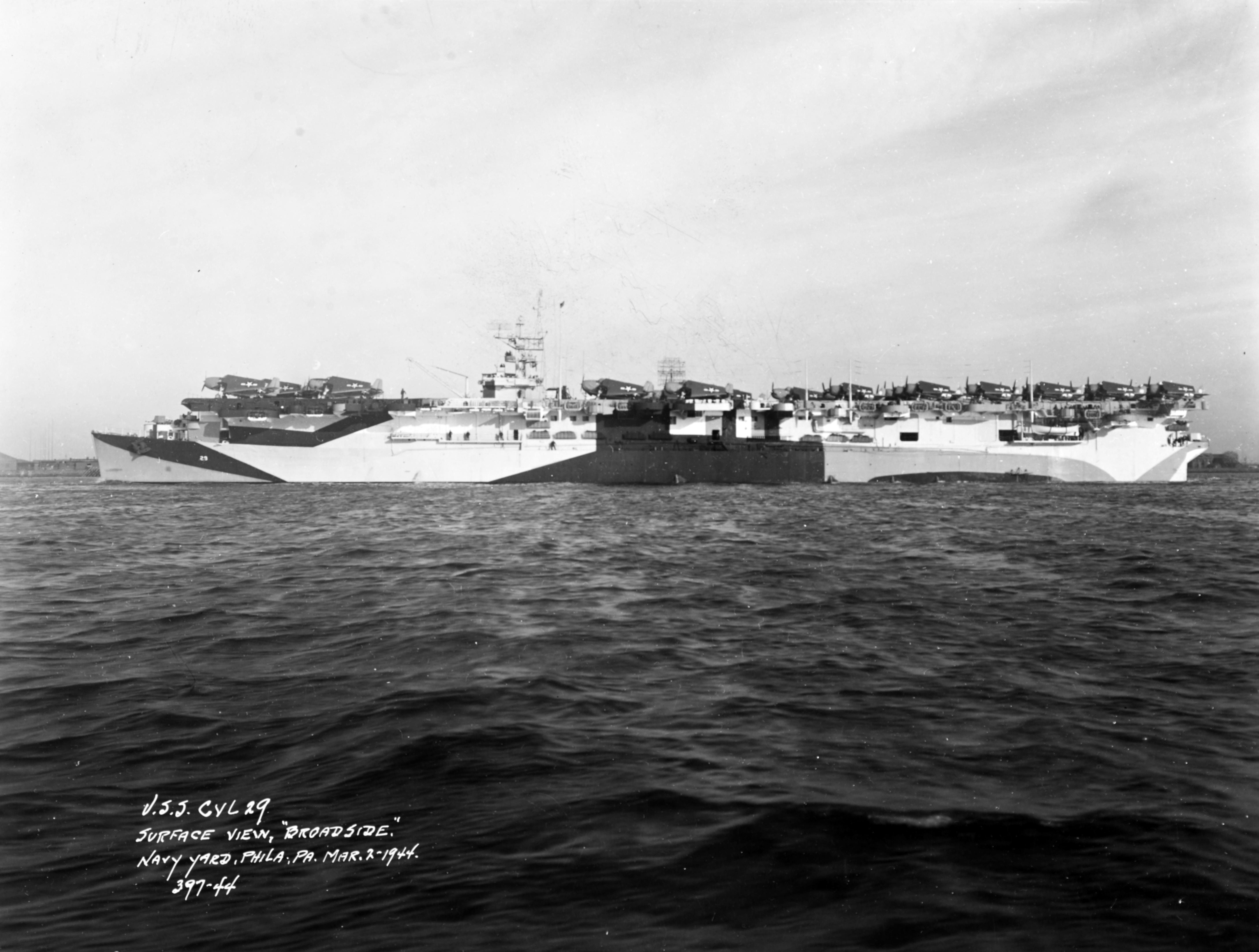 Bataan, Luzon, Philippine Islands, was the scene of heroic resistance by American and Filipino defenders against an overwhelming Japanese invading force during the initial phase of America's participation in World War II.

Bataan then returned to the United States for repairs. Repairs completed she joined TF 58 and participated in the fleet raids in support of the Okinawa operation (17 March-30 May 1945), during which her aircraft assisted in the sinking of the Japanese submarine I-56, 18 April 1945, in 26°42' N., 130°38' E. Retiring to the Philippines, Bataan joined the 3rd Fleet for operations against the Japanese home islands (10 July-15 August).

Bataan returned to the United States, arriving at New York 17 October 1945, and was assigned to "Magic Carpet" duty. On 10 January 1946 she arrived at Philadelphia to prepare for inactivation. Bataan went out of commission in reserve 11 February 1947.

Bataan was recommissioned 13 May 1950 at Philadelphia. In July 1950 she stood out for San Diego, upon arrival loaded Air Force cargo and personnel, and departed 16 November for Tokyo Bay. She arrived in Korean waters 15 December and until June 1951 her aircraft flew strikes in support of the ground forces.

Bataan departed for the west coast 2 June 1951 [VMF-312 pilot reports last day of combat as 6 June 1951] and after a brief stop at San Diego steamed to Bremerton, Wash., 9 July for overhaul. She returned to San Diego 20 November and on 27 January 1952 departed for Yokosuka, Japan, and thence to Buckner Bay, Okinawa. She conducted air exercises and other training maneuvers off Okinawa until 29 April when she sailed for Korean waters. Bataan continued operating between Japan and Korea throughout the summer of 1952 carrying personnel and supplies to the fighting area and launching strikes against the enemy. She left the fighting zone 11 August for San Diego. On 27 October the carrier once again stood out for the Far East and operated off Korea until 10 May 1953 when she departed for San Diego.

She remained in the San Diego area undergoing overhaul and training until 31 July. Then she sailed via Pearl Harbor to Kobe and Yokosuka, Japan, and then back to the United States where she reported for inactivation 26 August 1953. She went out of commission in reserve 9 April 1954 at San Francisco.