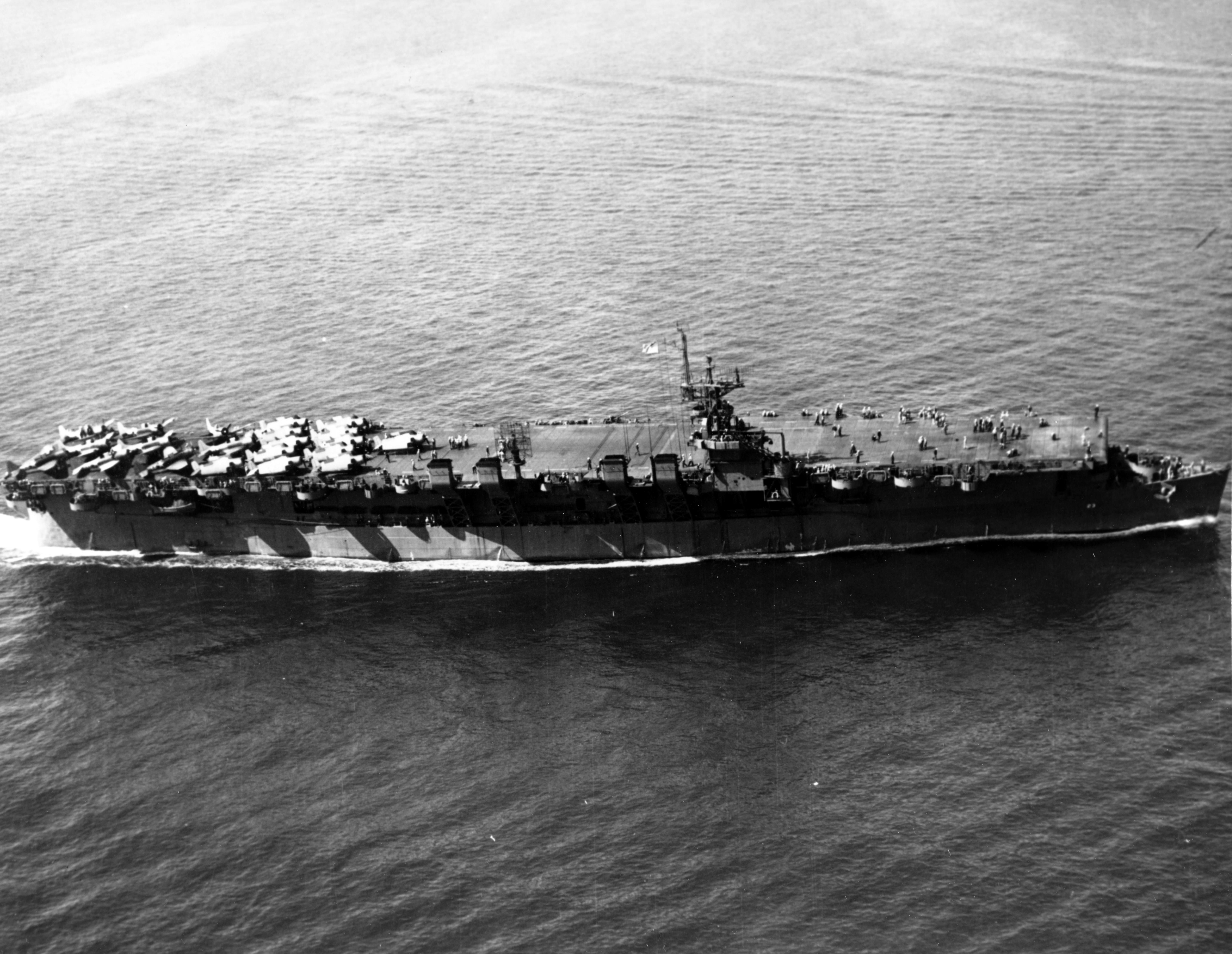 Following shakedown in the Caribbean, and reclassification to CVL-23 on 15 July 1943, Princeton, with Air Group 23 embarked, got underway for the Pacific. Arriving at Pearl Harbor 9 August, she sortied with TF 11 on the 25th and headed for Baker Island. There she served as flagship, TG 11.2 and provided air cover during the occupation of the island and the construction of an airfield there, 1-14 September. During that time her planes downed Japanese "Emily" reconnaissance planes and, more important, furnished the fleet with photographs of them.

Completing that mission, Princeton rendezvoused with TF 15, conducted strikes against enemy installations on Makin and Tarawa, then headed back to Pearl Harbor. In mid-October, she sailed for Espiritu Santo where she joined TF 38 on the 20th. With that force, she sent her planes against airfields at Buka and Bonis on Bougainville (1-2 November) to diminish Japanese aerial resistance during the landings at Empress Augusta Bay. On the 5th and 11th her planes raided Rabaul and on the 19th, with TF 50, helped neutralize the airfield at Nauru. Princeton then steamed northeast, covered the garrison groups enroute to Makin and Tarawa and, after exchanging operational aircraft for damaged planes from other carriers, got underway for Pearl Harbor and the west coast.

Availability at Bremerton followed and on 3 January 1944, Princeton steamed west. At Pearl Harbor, she rejoined the fast carriers of TF 50, now designated TF 58. On the 19th, she sortied with TG 58.4 for strikes at Wotje and Taroa (29-31 January) to support amphibious operations against Kwajalein and Majuro. Her planes photographed the next assault target, Eniwetok, 2 February and on the 3rd returned on a more destructive assignment--the demolition of the airfield on Engebi. For 3 days the atoll was bombed and strafed. On the 7th, Princeton retired to Kwajalein only to return to Eniwetok on the 10th-13th and 16th-28th, when her planes softened the beaches for the invasion force, then provided air cover during the assault and ensuing fight.

From Eniwetok, Princeton retired to Majuro, thence to Espiritu Santo for replenishment. On 23 March, she got underway for strikes against enemy installation and shipping in the Carolines. After striking the Palaus, Woleai and Yap, the force replenished at Majuro and sortied again 13 April. Steaming to New Guinea, the carriers provided air cover for the Hollandia operation (21-29 April), then crossed back over the International Date Line to raid Truk (29-30 April) and Ponape (1 May).

On 11 May, Princeton returned to Pearl Harbor only to depart again on the 29th for Majuro. There she rejoined the fast carriers and pointed her bow toward the Marianas to support the assault on Saipan. From 11-18 June, she sent her planes against targets on Guam, Rota, Tinian, Pagan, and Saipan, then steamed west to intercept a Japanese fleet reported to be enroute from the Philippines to the Marianas. In the ensuing Battle of the Philippine Sea, Princeton's planes contributed 30 kills and her guns an other 3, plus 1 assist, to the devastating toll inflicted on Japan's naval air arm.

Returning to the Marianas, Princeton again struck Pagan, Rota and Guam, then replenished at Eniwetok. On 14 July, she got underway again as the fast carriers returned their squadrons to the Marianas to furnish air cover for the assault and occupation of Guam and Tinian. On 2 August, the force returned to Eniwetok, replenished, then sailed for the Philippines. Enroute, its planes raided the Palaus, then on 9-10 September, struck airfields on northern Mindanao. On the 11th, they pounded the Visayas. At mid-month the force moved back over the Pacific chessboard to support the Palau offensive, then returned to the Philippines to hit Luzon, concentrating on Clark and Nichols fields. The force then retired to Ulithi, and in early October, bombed and strafed enemy airfields, installations and shipping in the Nansei Shoto and Formosa area in preparation for the invasion of the Philippines.

On the 20th, landings were made at Dulag and San Pedro Bay, Leyte. Princeton, in TG 38.3, cruised off Luzon and sent her planes against airfields there to prevent Japanese land based aircraft attacks on Allied ships massed in Leyte Gulf. On the 24th however, enemy planes from Clark and Nichols fields found TG 38.3 and reciprocated. Shortly before 1000, a lone enemy dive-bomber came out of the clouds above Princeton. At 1500 feet the pilot released his bomb. It hit between the elevators, crashed through the flight deck and hanger, then exploded. Initial fires soon expanded as further explosions sent black smoke rolling off the flight deck and red flames along the sides from the island to the stern. Covering vessels provided rescue and fire-fighting assistance and shielded the stricken carrier from further attack. At 1524, another, much heavier explosion, possibly the bomb magazine, blew off the carrier's stern and with it the after flight deck. Birmingham (CL-62), alongside to fight fires, suffered heavy damage and casualties.

Efforts to save Princeton continued, but at 1604 the fires won. Boats were requested to take off remaining personnel and shortly after 1706, Irwin (DD-794) began to fire torpedoes at the burning hulk. At 1746, Reno (CL-96) relieved Irwin and at 1749 the last, and biggest, explosion occurred. Flames and debris shot up 1000-2000 feet. Princeton's forward section was gone. Her after section appeared momentarily through the smoke. By 1750 she had disappeared, but 1,361 of her crew survived. Included in that number was Capt. John M. Hoskins, who had been prospective commanding officer of CVL-23 and lost his right foot with her, but who, despite the loss, would become the 1st commanding officer of the fifth Princeton (CV-37).